Hubby gets in the van and asks, “Hon…why is there a bra in here?”

Well I thought after all these years that the answer would be obvious.  I took it off and tossed it! What else would it be doing in there?

I have been becoming increasing more sensitive these days.  I am not sure if it is because of my increasing discomfort during the pregnancy, though I am sure that has something to do with it.  As I am expanding, all of my clothing,and yes undergarments, are getting tighter and more uncomfortable by the minute.

I grabbed a maternity outfit out of a bin that I had stored from my last pregnancy, quickly shoved it on and ran out the door–late to my doctor’s appointment again.  I had not worn this particular outfit very often during my last pregnancy and now I remembered why.  The shirt collar was itching, the arms hole were uncomfortable (they must have shrunk damn it!), and I was already wiggling around and tugging on it before I hopped in the car.

As I drove up the road I fidgeted some more. I was becoming increasingly cranky and began growling at the other drivers on the road.  I cursed at a woman who rudely cut me off and growled even more loudly this time.

“Mom, are you ok?” Aspie Teen asked from the passenger seat.

“No, I’m cranky.” I said.  The bra must have shrunk too because now the lace was scratching (I thought I had pulled that tag in the back off already, apparently not.) and for some reason I felt like I had something metal stabbing me in the back–and I was having trouble taking deep breaths.

“Arrrgghh, that’s it!” I yelled when I pulled up to a red light. I unhooked the back of the damn thing, pulled the straps out the sides of my sleeves, and wiggled it down over my basketball belly.  Then I signed in relief and tossed the bra into the back seat!

It was like magic. I was free and my mood began to improve for the rest of the ride to the doctor’s.  The appointment went by without a hitch, but I am sure that I would have been irritable and agrumentative about everything had I left that thing on to scratch, stab and choke at me.

Victoria can keep her satin, lace, and metal tangs–I was done!

So back to the orginal conversation…

“What? Oh…I tossed it at the stop light.”

Hubby shakes his head and rubs his temples.

Lesson learned: When I am irritable for no reason that I can pinpoint do a clothing and comfort check, it usually reveals something that is causing my sensitivities to roar and my emotions to be overloaded.

Before 1994, Asperger’s Syndrome did not exist as a diagnosis in the United States. Autism would not have even been considered if a child was verbal, least of all very verbal, or if a child was not intellectually challenged.

I was verbal, too verbal. I was smart, too smart for my own good.

Baseball stats were not the only bits of data that I consumed and stored. I consumed books. I memorized them, and don’t you dare read the storybook to me and think you will skip over anything. If I had already heard the book, you were in trouble.

My father used to read to me, but many times tried to skip over things thinking I wouldn’t know any better. After all, I couldn’t read—or, could I?

I would promptly point out where he missed along with what page the text appeared on. Long before I entered kindergarten I didn’t need him to read to my any longer. I taught myself to read.

I honestly could not figure out why we were “learning” to read in school. I already knew how to read; therefore, all the kids around me knew also. We were just wasting time.

“We thought we had a little genius on our hands,” my mother said, “but you were just a little bitch.”

I was not a quiet withdrawn child; in fact, I never shut up—ever. I rattled off my newly learned facts to anyone who would listen, and to those who wouldn’t. The interesting part though is I would only talk to adults. Children had nothing to contribute to the conversation, they thought I was odd. Sometimes they ran from me, or they ran off to play.

Adults on the other hand thought I was brilliant. They laughed at my little speeches, and thought it was cute when I recited lines from TV shows and music lyrics to answer their questions. Well—most of the time.

There were times when my tendency to quote others to convey my feels landed me in a heap of trouble. As “grown-up” as I sounded at almost four years old, I still had my bottle. It was something I was absolutely unwilling to give up. The doctors were not concerned, and actually encouraged my parents to allow me to have it as long as I wanted since I ate next to nothing.

So why would I need to eat anything else. My father didn’t share this view.

When he insisted that I eat the dinner my mother prepared, I, as always, refused. This time he persisted.

“Because I said so, now eat it!” I had somehow made him angry, but not as angry as he made me. Maybe he shouldn’t have played so much Billy Joel music around me; he should have seen this coming.

“You cannot tell me what to do. It’s my life!” I said. “Go ahead with your own life, leave me alone!”

I ran up the stairs, clutching my bottle in my hand.

My grandparents lived upstairs. Grandma says milk is food. I don’t need to eat my mother’s food, I have my own.

That was the last time I saw that bottle, or any other ones. So for the next year I lived on peanut butter.

There were times when my speech and comprehension appeared advanced. It may have appeared to my parents that I was being obstinate and difficult—that I only wanted my way. But the truth is I had no idea the real implications and meanings behind the words I recited from the song, My Life. It just appeared that I applied it correctly at the time.

Since I was already able to read, I often used “scripts” to speak to people. I recited passages from books that seemed appropriate at the time. I sang song lyrics, or in this case, screamed song lyrics at others. I also repeated what I heard adults saying applying to my situations haphazardly. Because I was smart, everyone assumed that the words were my own, my thoughts, and that I knew exactly what I was saying. I am sure I did not.

My Book on Kindle 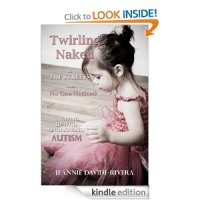 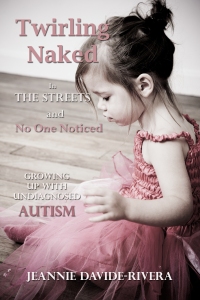